The winning proposals of 2019-2020 edition has been published 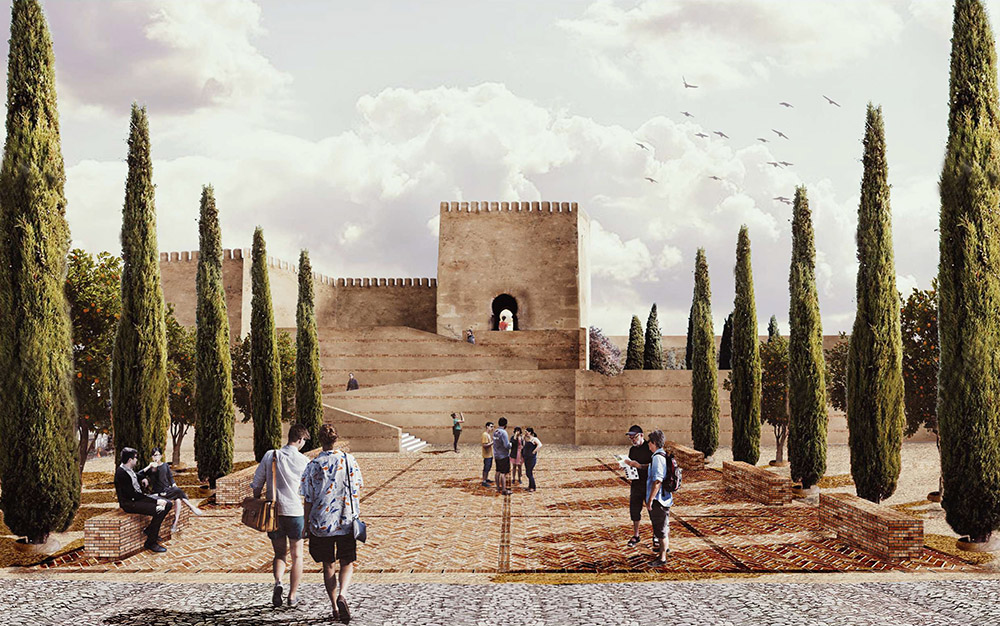 The Driehaus Competition is a unique and generous initiative from US financier Richard H. Driehaus, through the Richard H. Driehaus Charitable Lead Trust, convened by the Ministry of Transport, Mobility and Urban Agenda, which seeks to recover the Spanish architectural heritage. The three locations selected in the first phase of the competition were Alzira, Santiago de Compostela and Santa Cruz de la Palma. Exceptionally, the candidacy of Guadix was taken up again, since no winning project was awarded in 2019.

In this second phase, 100 national and international architecture studios submitted their design proposals, and a total of 58,000 € have been awarded in prizes. Each winning project will receive 12,000 €.

ack in the days, held a series of detached houses which would adapt to the topography all along the Rua de Caramoniña. The walls of these houses are still preserved along with a series of terraced back yards, recently retrieved and incorporated as part of the network of public spaces. The idea is to retrieve the existing constructions to destine them to temporary lodgement for students and artists, as well as connecting this area with its adjacent park of Santo Domingo de Bonaval, which today does not open towards this road. Within this park, the actions to be taken can involve both an adjacent construction to the northern wall of the park – of which only the bearing structure remains – as well as a building owned by the town council – located right next to the current Galician Contemporary Arts Centre – which today is only used as a storage area. Both these last spaces which have been mentioned, may be destined for complementary uses to those of the rehabilitated dwellings such as workshops for artists or other workspaces. 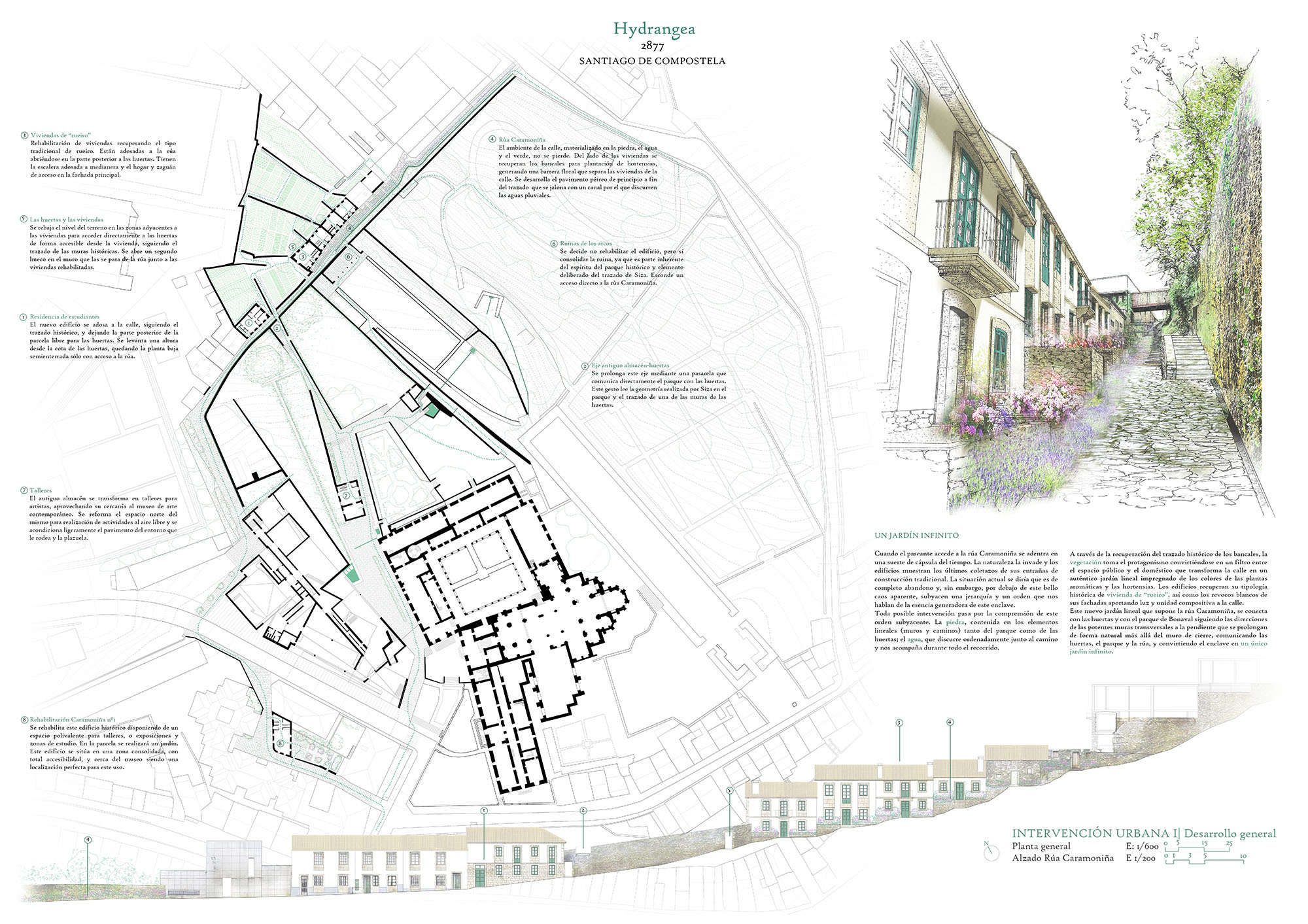 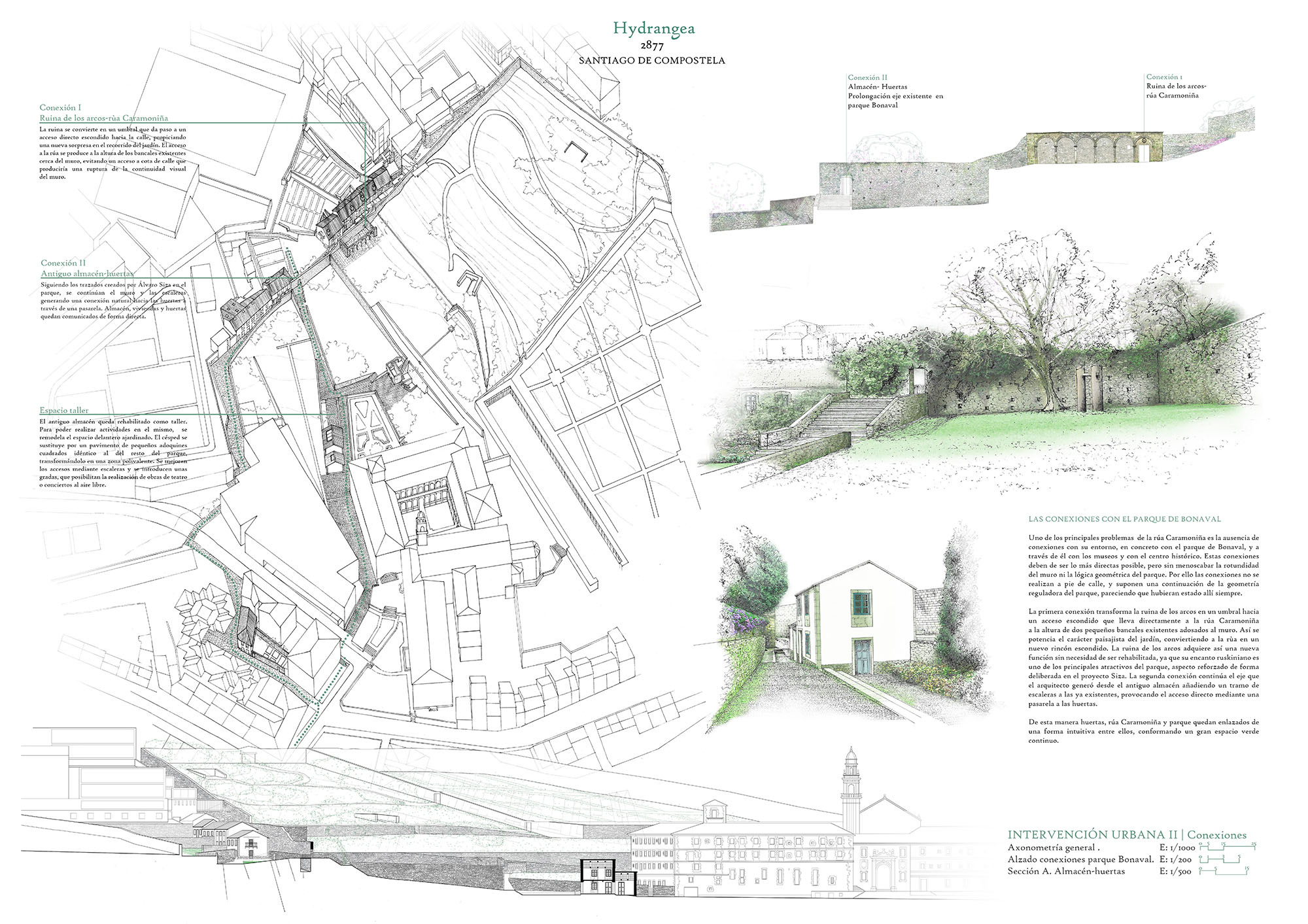 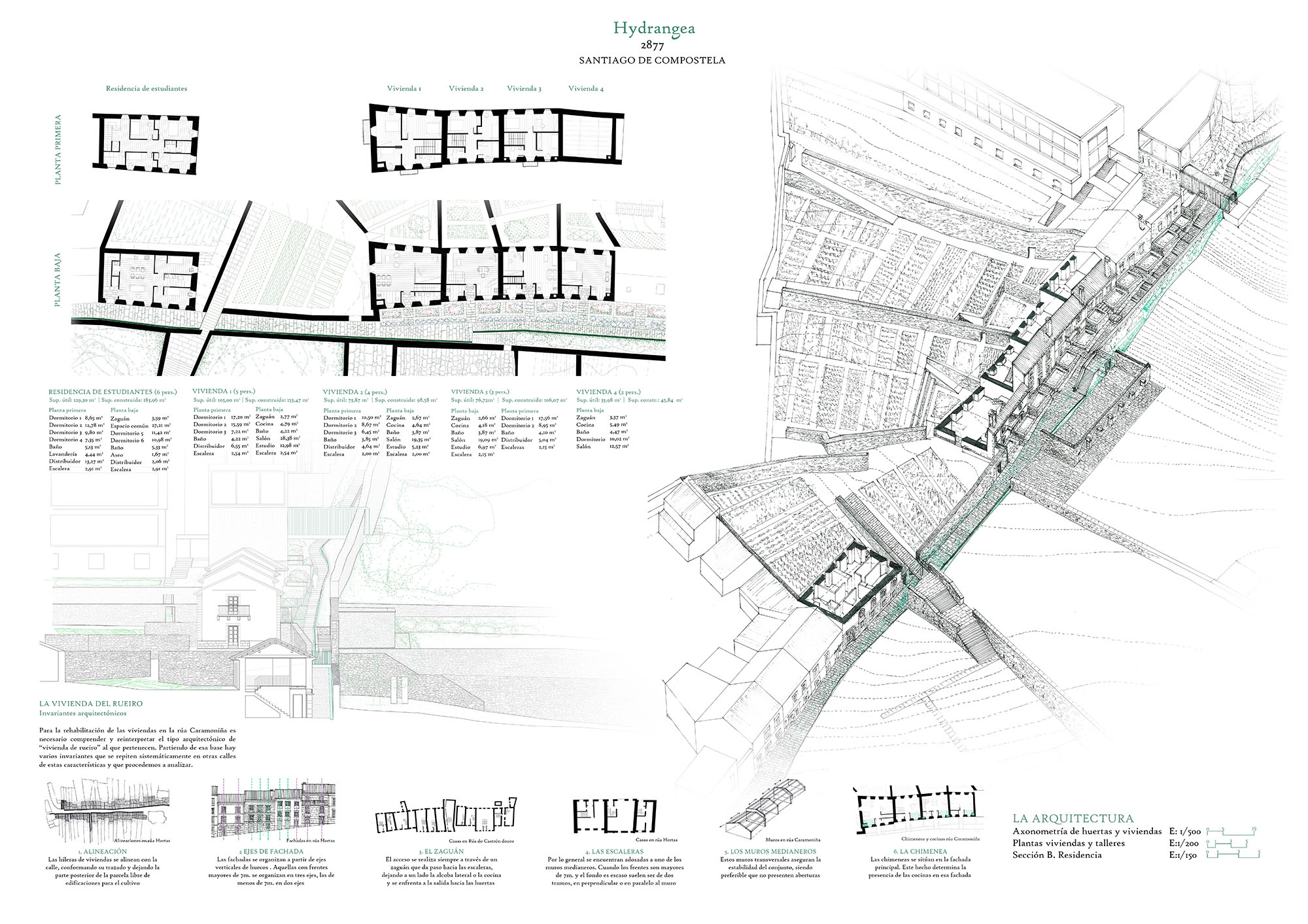 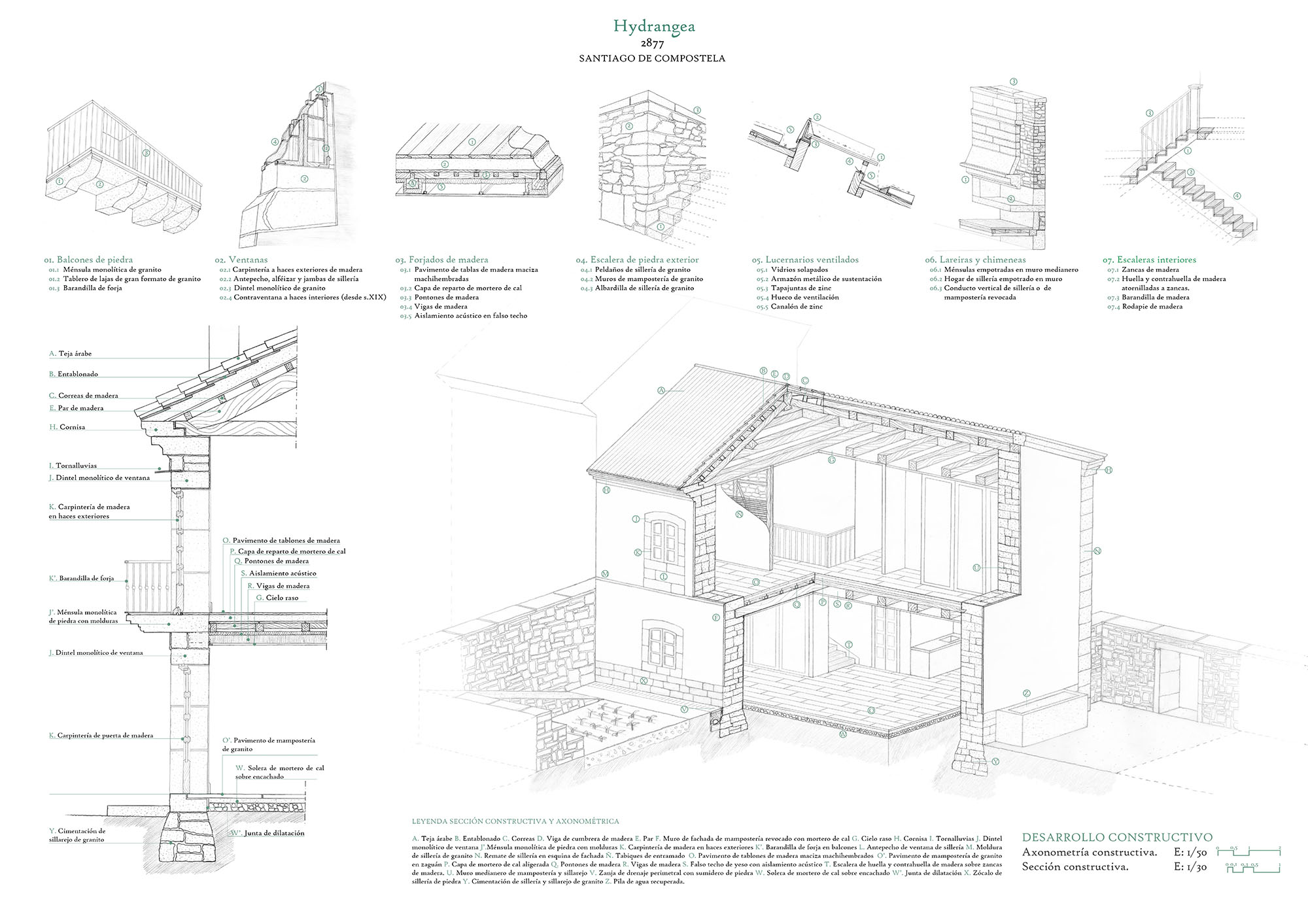 The winning initiative for Santiago de Compostela was Hydrangea, by the team of architects of Eva Niño, Elia San Román and Carmen Carral. The project recovers several constructions, currently in ruins, to build housing for artists. Additionally, it establishes a discreet connection between this area and the park of Santo Domingo de Bonaval and rehabilitates a municipal warehouse into a space for workshops or exhibitions.

The jury highlighted its way carry out the rehabilitation of the series of constructions which are in a state of ruin at present, to turn them into dwellings for artists, retrieving their original shapes and traditional constructive techniques, as well as because of the subtle connection in two different levels of the Rúa da Caramoniña with what today is the park of Santo Domingo de Bonaval. This proposal shows a unique ability to respond to the several challenges this area presented without leaving to one side the need to preserve and enhance, at the same time, the most attractive aspects it still maintains today.

The municipality of Alzira has been selected by the Jury of the Competition because of its proposal to retrieve the architectural and urban identity of the historic centre of the city, more specifically, the western front of “La Vila”. To this aim, it is suggested that the key to success lies within the retrieval of the former urban fabric of the area and the enhancement of the Almohad fortress, of the remains of what once was the temple of Santa María and the lost Bridge of Sant Gregori. Redefining the historic character of this area – which today is extremely blurred – would mean an important step towards restoring part of the heritage value of the complex, since this elevation is the most visible one within the surrounding landscape and the least obstructed by the existence of later constructions built outside the wall. 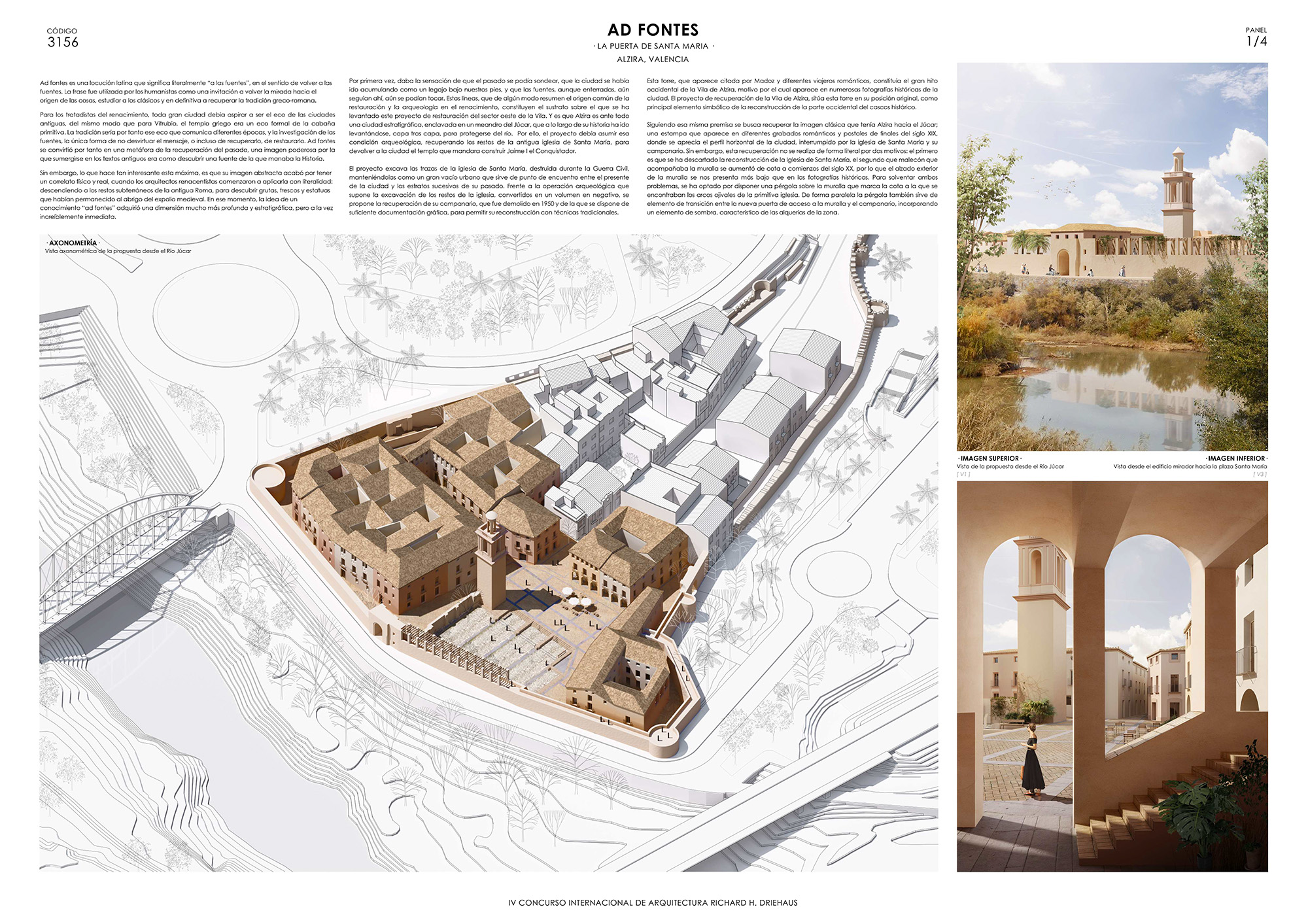 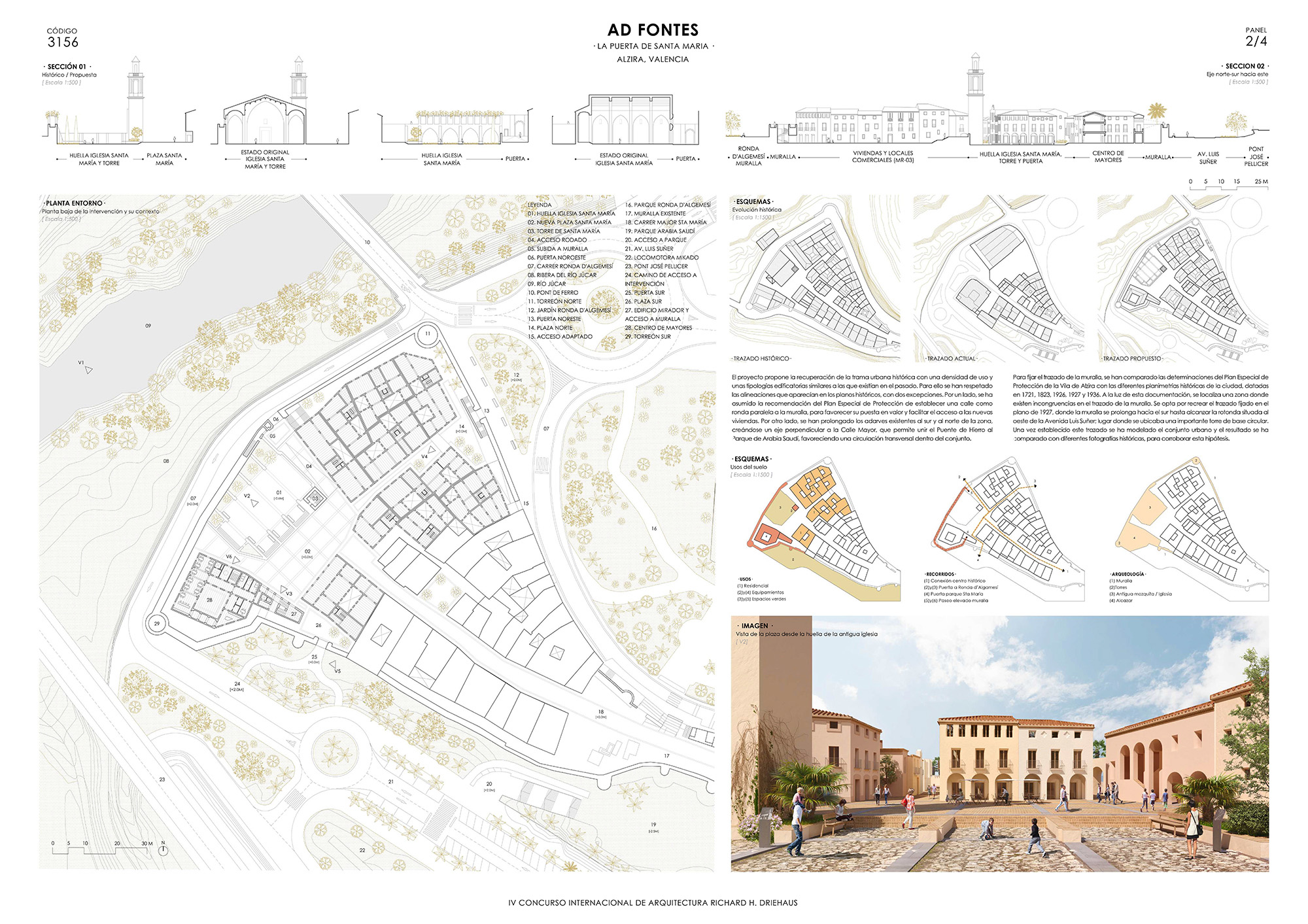 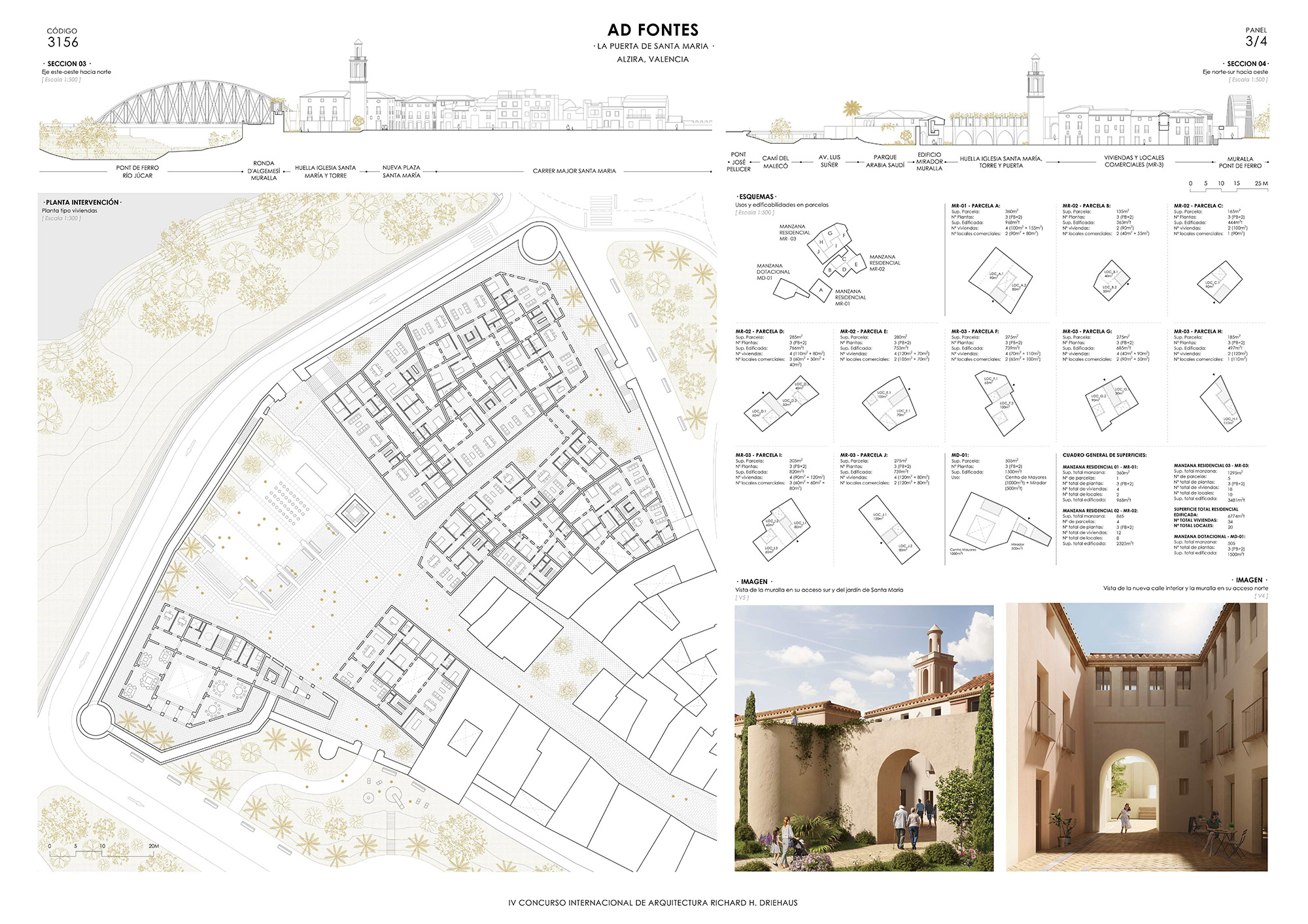 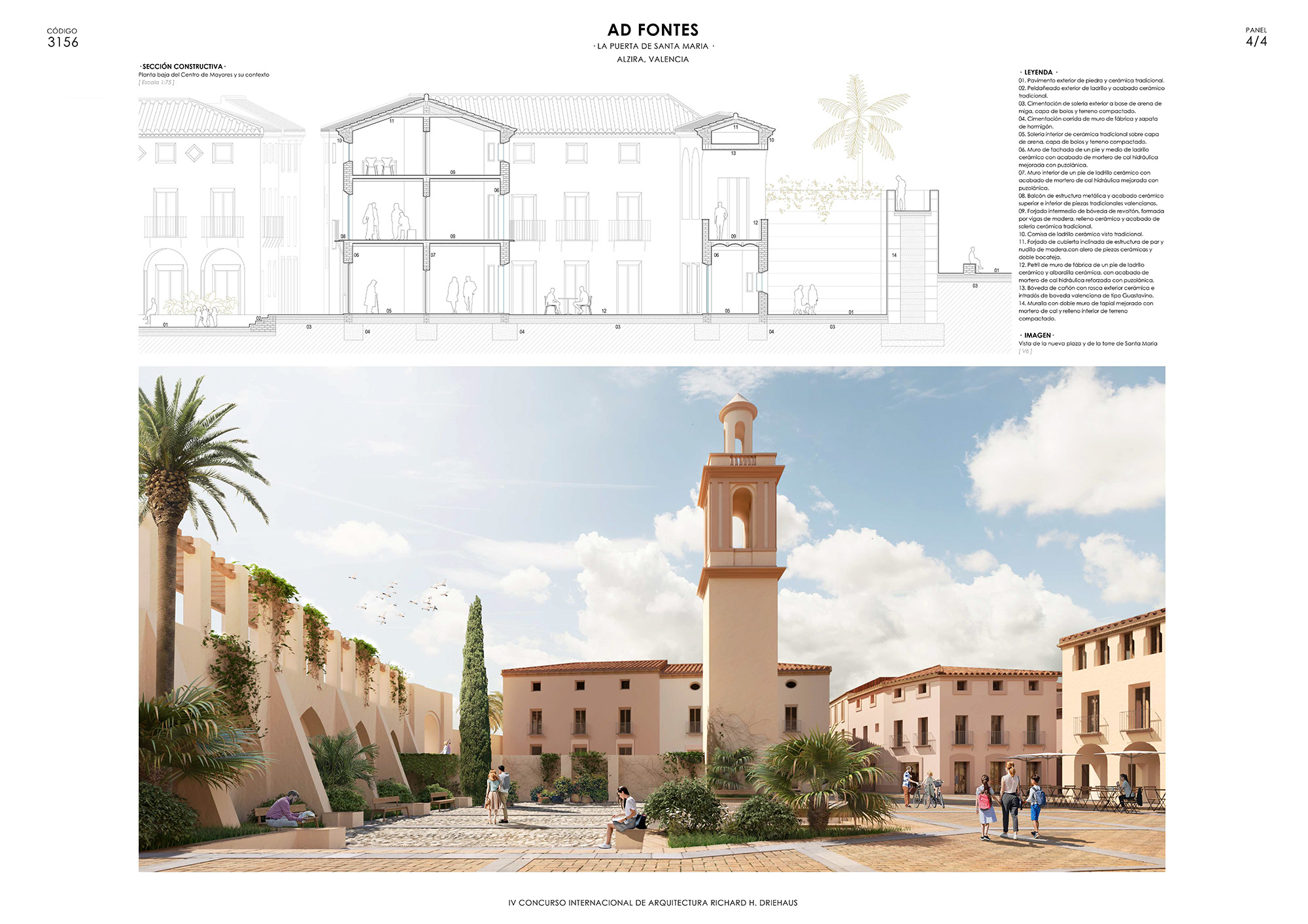 In the case of Alzira, the winning proposal was ‘Ad Fontes’, by the Seville firm Jiménez & Linares. The project proposes the recovery of the urban fabric of the western part of “la Vila” and the rehabilitation of the almohade wall and the remains of the temple of Santa María. The new streets in this proposal converge on a plaza connected to the banks of the Júcar river. Additionally, it recovers the footprint of the old church and rebuilds its bell tower, which would become a lookout.

The proposal stood out because of its aim to retrieve the urban fabric of the west area of “la Vila” and because of how it gives value to the vestiges of the Almohad wall and the former church of Santa María, the main heritage elements which shape this end of the urban fabric. The new suggested streets converge in a square connected to the riverbank of the river Júcar. New businesses and facilities open towards this square, where the floor plan of the former church is enhanced. The primitive bell tower is retrieved, turned now into a viewpoint which makes it become the main landmark when one analyses the profile of the city and also the finishing element of the street which runs along its main axis.

Even though this proposal was included within the 2018-2019 call for entries of the Competition, it has been exceptionally accepted that the proposal of the Town Council of Guadix is included again this year, since last year the prize for this municipality remained un-awarded because the presented proposals did not seem to be entirely appropriate for this location. The aim of this intervention is to retrieve and enhance the complex which is set at the top of the city. The proposal includes a new treatment of the surrounding public spaces around the former Citadel, some of which are currently very degraded and underused, the reconstruction of the houses in a current state of ruin which can be found in its northern front and the revitalization of the former adjacent Palacio de los Saavedra, which could be transformed and used by the accommodation sector. These interventions will enable the enhancement of the urban scene and will contribute to the conservation of the existing heritage and to revitalize the complex which constitutes one of the main historic and landscape landmarks of the city with which many people from the area feel a deep connection to. 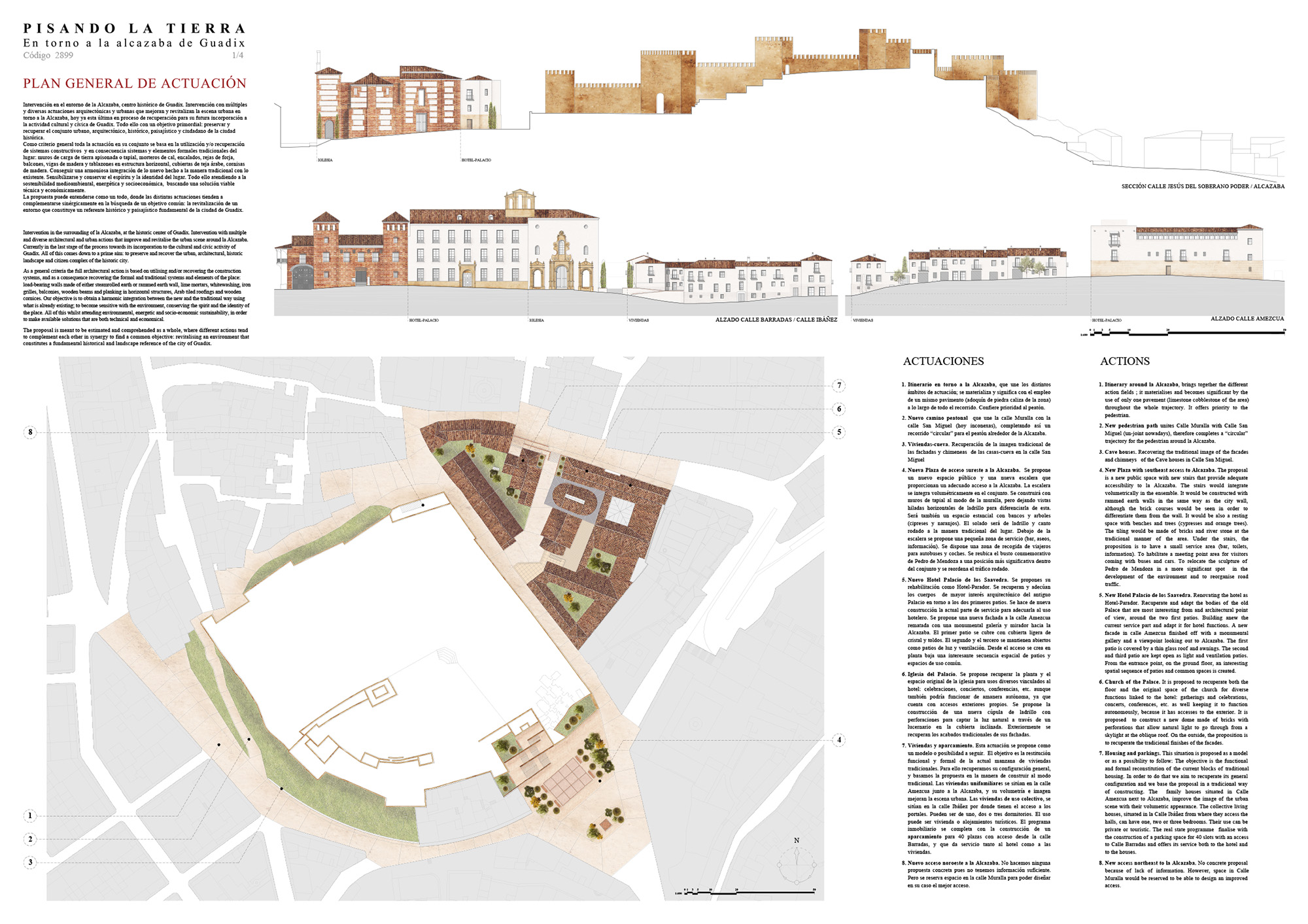 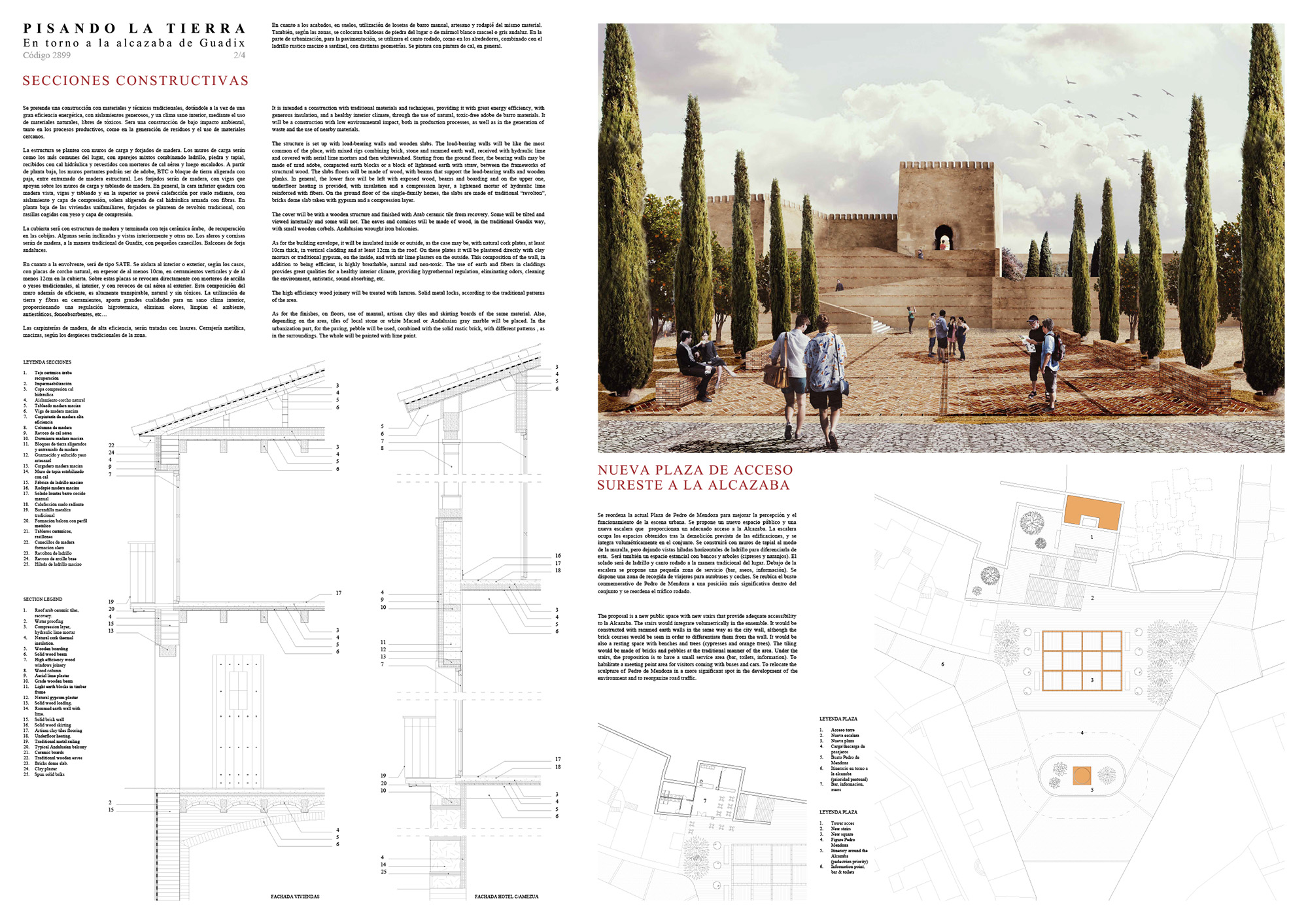 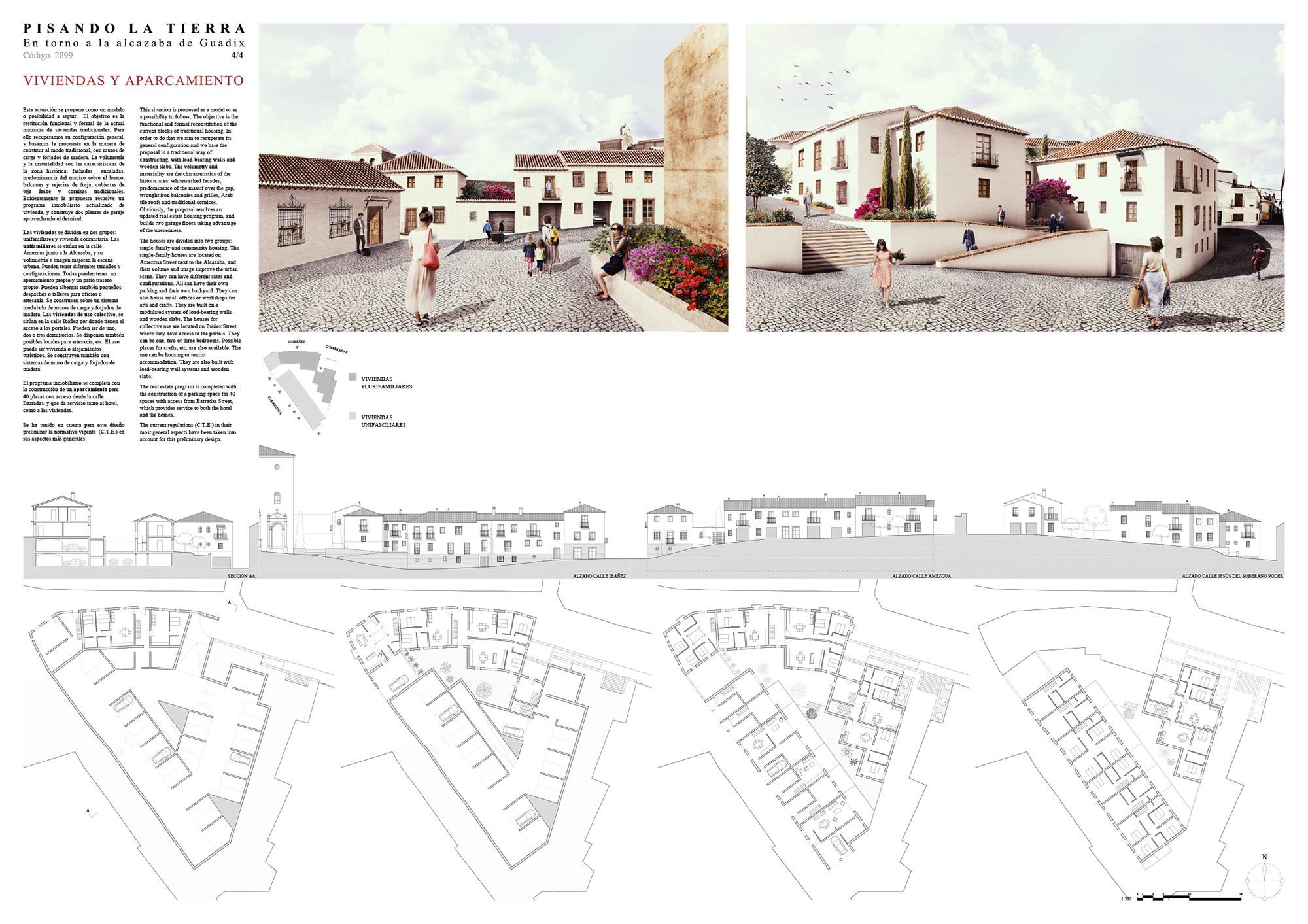 The Guadix proposal seeks to revitalize the area around the old citadel, the Alcazaba, currently derelict. The project selected “Pisando la Tierra”, by architects Alfonso Zavala and Ramón Andrada, stood out for its plan to rearrange the Plaza Pedro de Mendoza and to focus the intervention on the access to the Alcazaba. The project is completed with the reconstruction of housing on the site according to local tradition, and the rehabilitation of the Palacio de los Saavedra as a hotel.

It was found worthy of recognition for the reorganization it suggests of the Plaza Pedro de Mendoza, which gives back the main historic access to the Alcazaba its importance, as well as for how naturally this access is restored by means of constructing a series of platforms at different levels. It was also highlighted for the solution put forward for the residential block, which is in current state of ruin, where the authors of the proposal masterfully put into practice the forms and materials of the tradition of the area of Guadix, with a result which is completely aligned with the identity of this place.

Finally, the project for Santa Cruz de la Palma was not awarded. The jury decided not to select a winning proposal, since they did not fully respond successfully to the challenges described by the City.

Due to the high quality of the rest of the proposals, the Jury has granted several honorary mentions, each of them awarded with 2,000 €, to eleven projects that contributed to the revitalization and beautification of these four locations.

The jury, composed by representatives of the Ministry of Transport and Culture, the Consejo Superior del Colegio de Arquitectos de España, INTBAU (International Network for Traditional Building Architecture and Urbanism), the city councils of the four towns and the Rafael Manzano Prize, met via teleconference and assessed the quality and feasibility of the projects.