The municipality of Grajal de Campos has been chosen by the Competition’s Panel of Judges because it proposes a kind of project that is nowadays as necessary as its implementation is infrequent: being able to complement a town’s main square with architectures that are inherent to the local tradition. Special appreciation has been shown for the potential of this site in order to give rise to new architectural designs that can be used to show it is possible to produce an architecture that adapts to current needs while at the same time being capable of continuing the shapes and materials characteristic of the place’s traditional identity. An architecture that can also maintain the beautiful hierarchy that exists between the monumental and vernacular buildings making up the ensemble. Furthermore, it is the town with the smallest population among all those chosen and the project thus also seeks to contribute to the preservation of those urban ensembles with the fewest resources and tools available for these purposes.

Grajal de Campos is located in the south-eastern corner of the province of León, in the Sahagún region, being part of the Tierra de Campos area. This small town registered a population of 243 in the 2015 census. Thus while it has a privileged location and landscape matched with a rich architectural heritage, it is nevertheless at grave risk due to its drastic population decrease.

It is, however, well connected, with rail access from the León-Valladolid line and by car from the León-Burgos highway. In addition to this, it is also located on the traditional French Way of Saint James pilgrimage route, although its branch of the route is less travelled than the route’s modern version.

Grajal de Campos’ historical relevance is unmistakable, as can be seen from the small town’s heritage. It contains four locations that have been declared Cultural Interest Sites: the Villa itself and the French Way of Saint James pilgrimage route (classified as an Historic Ensemble), Grajal Castle, and the Palace of the Counts of Grajal (both of which are classified as national monuments). Its monumental architecture also includes the Church of San Miguel, the Chapel of the Virgen de las Puertas, the Hospital of Nuestra Señora de La Antigua and the Convent of Nuestra Señora de La Antigua.

Grajal de Campos’ claim to historical heritage stretches beyond the preservation of the city’s buildings and its rich heritage of traditional architecture that still remains alive today, as the layout and urban structure of the renaissance city that Grajal once was have major cultural value by themselves.  The city’s central plaza and its residential architecture in general, which exemplifies the traditional construction types of Tierra de Campos, provide a series of unified, coherent buildings that, if properly handled and used, could form the foundation for the town’s recovery and revitalisation.

The fundamental building material of its architecture is earth. Major digs can be seen from various points in the city that for years were a source of raw materials for building the adobe and brick houses that form the city’s urban centre.

Its buildings are mainly built with adobe or brick load-bearing walls, although there are also half-timbered walls used for the internal divisions. Walls reach up to a maximum of two floors high, with the construction underground taking up nearly the same volume because many of the city’s houses are built over cellars that owners dug on their own property and then often covered with brick vaults.

Grajal de Campos has a highly homogeneous architecture. The walls are rendered in earth mortars with heavy use of straw or in lime mortars coloured with the same earth. The openings are notably vertical, with mass predominating over the openings in façades. Most of the windows and doors are made in wood painted earth red, and adorned with wrought iron grilles and fittings. There are protruding balconies with very modest dimensions, made from wrought iron, and also evidence of the existence wooden galleries, such as those used in the palace before it fell into ruin. The main public spaces generally have porticoed ground floors that open onto the street, built in the form of simple round poles or square wooden posts, and always built on stone bases. The roofs have wooden structures with pitched roofs covered with ceramic tiles produced in the local tile workshops, which are now abandoned and in ruins. 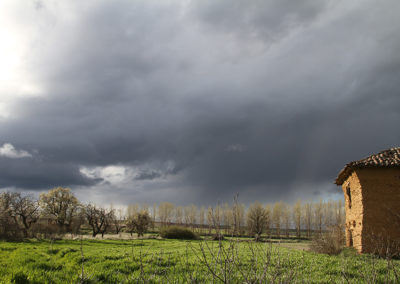 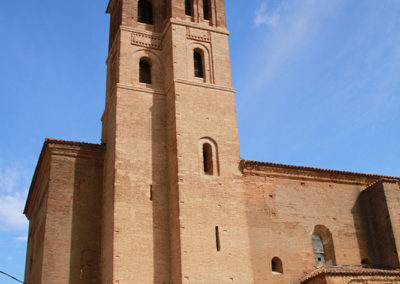 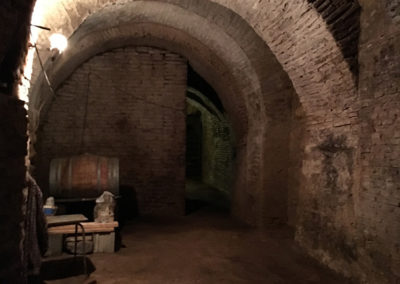 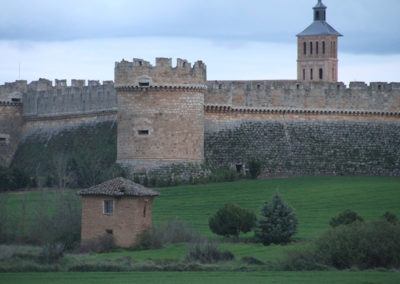 Grajal’s main assets these days are its landscape, its Renaissance monumental ensemble, and the presence of the French Way of Saint James. The goal therefore should be to work on these aspects as the engine driving the town’s recovery. The purpose of these proposals should therefore be to beautify and revitalise the heart of its urban centre, providing it with new uses and trying to attract not only new visitors, but also new permanent residents.

The proposed area of intervention is around the town’s main plaza. This space’s potential resides in the importance of the buildings that delineate it (the church, the palace, the current city hall) and in the existence of an empty lot owned by the city on one side of the plaza, facing the palace, and which resulted from several homes falling into ruin.

Here, new buildings could be used to redefine the plaza’s southern boundary, to strengthen the existing hierarchy amongst its public and private buildings, and to enhance the location’s uniqueness. Furthermore, because of its exceptional size, the palace, owned by the city, could take on a large number of functions that could help relaunch this city.

The proposal would be to reconfigure the ruined limit of the square with its historical use: as homes with a ground floor with arcades and with a more public nature, linked to the past commercial splendour of this plaza.

The monumental palace has been undergoing minor work thanks to the effort the city has put into restoring it, but most of the building is still out of use, with many areas that are heavily deteriorated.

The south wing, with its loggia, the west wing, where a small museum is open, the patio, and the imposing staircase, are the best preserved parts of the building. The east side of the palace is in urgent need of restoration. Because of its strategic location next to the palace’s garden, the city has proposed a tender bid process to find a company that could install tourist lodging in this area. This proposal is also related to the city’s plan to promote the historic French Way of Saint James. The building’s façade has also lost a major wooden gallery that used to open onto the garden. All that remains are a few parts that are now stored inside the palace. Developing rebuilding proposals for this façade is another goal of this contest.

Because of the significance of the building, other uses that could have been envisaged in the proposal included an exhibition space to complement the currently existing one, or redesigning the current space; multi-purpose spaces or classrooms for holding various types of training or children’s activities, or even work spaces that could be rented by residents. 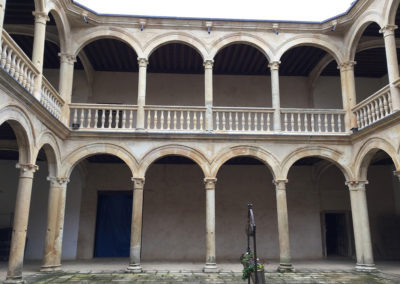 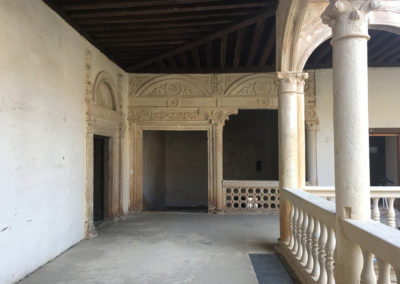 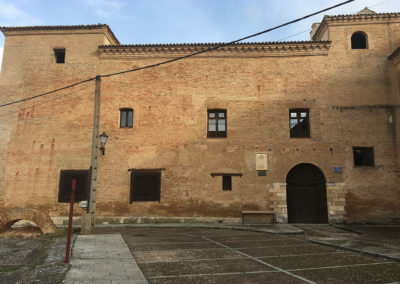 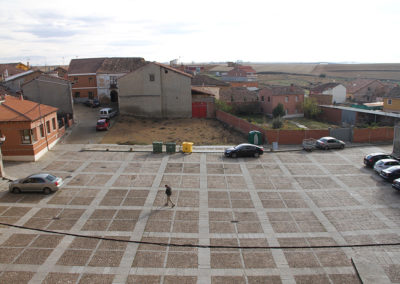